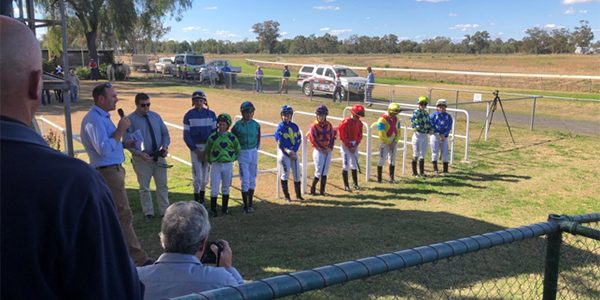 In front of a good winter crowd at Gunsynd Park, a great days racing was witnessed with another highlight being the Peter Clarke  locally trained duo of Bold Crossing & Cash n Run also taking the cash.

The first race was the Fulton Hogan Class Bover 1200 metres and Bold Crossing began what was a super day for Geoffrey Snowdenwhen he sat just off the early pace set by Master Cramsie and finished far too strong to take the prize. Bold Crossing was well backed to start equal favourite at $4. Master Cramsie held on for second and Niconi Bay just pipped out Backup Billy for third.

Race two was the Boggabilla Town & Country Club 1200 metre Maiden which saw Pat Webster salute with Onelastcrown who has shown improvement at recent starts. Jodi Worley gave Onelastcrownevery chance sitting just off the pace like the previous race and Pop & Zac had no answer in the run to the wire.  Let him Fly just caught Dor Dame right on the line for third.

The third was the Morella Ag/Goondiwindi Cotton Benchmark 60 over  1400 metres. Track specialist Free Billy proved far too strong and made light work of the 66kg impost. Regular jockey Geoffrey Snowden took off at the 600 metre mark, something that has become a  regular part of racing at Gunsynd Park since the  home turn renovations and gave nothing else a chance in the run to the wire. Stable mate Track Flash boxed on well but was never in the hunt.  Landale plugged on for third but it was a win not to be forgotten and although 10 year old, there are still plenty of wins left in Free Billy.  Maybe the Talwood Cup is at his beckon call.

Locally owned and trained Cash n Run showed his usual pace in the Wobbly Boot/Air Care/Air Ag 1000 metre Benchmark 60 and was too slippery for Sneaky Sniper and Swiglars who was well backed to beat the favourite. Cash n Run gave Snowden three for the day and Peter Clarke two.  Once again, Cash n Run will be hard to beat over any short course of his choice and if that happens to be Talwood, will take a power of beating.  One would thing Geoff Snowden will already be booked for the Clarke trained pair at Talwood.

The Mc Cosker family have joined the list of growing supporters of Gunsynd Park and presented the Carrington Cotton Boggabilla Cup over the flying 1000 metres.  Peter Sinclair made no mistake in shooting for a double when Upstart made light work of the event.  An extremely confident Brooke Stower just sat on the hammer of early leader Love and Lies in the early part and when produced at the top of the straight, he just left the opposition standing. A very impressive victory albeit in a small filed but again, you will see Upstart win plenty more in the near future.

So the country races follow the course onto Talwood in a fortnight on August 17 for the annual Cup and then back to Goondiwindi on September 7for the Vern Kleinschmidt Goondiwindi Gold Cup. It will be major weekend for the town wit the Rotary Gourmet in Goondi on the Sunday.

The club has extra activities arranged for the day with evening entertainment after the last.  Former local lad, Will Day will play immediately after the last race so a big crowd is assured for the great event. Another extra on the day will be the Bird Cage Special Package” which will be held for the first time in the new undercover Trackside area. This event will be a limited seating arrangements and a ticket only affair. Tickets are $50 per head and full details are available on the Facebook or website.