Midway between Goondiwindi and Inglewood on the Cunningham Highway, you will find the tiny town of Yelarbon. The geologically distinct landscape of desert and spinifex country is characterised by a natural salinity scald. This naturally hostile environment results in some unique vegetation and wildlife. Stretch your legs and enjoy the Desert Jewels Biodiversity Walk that has educational signage to identify the variety of vegetation and wildlife including reptiles, marsupials and birdlife. The 500-metre walk is easily accessible from town and suitable for all fitness levels.

If you are looking for somewhere to take a break, the Yelarbon Lagoon on the edge of town is a restful spot with a well-maintained picnic area and plenty of shade. Better still stay overnight at the Recreation Reserve with low cost camping and caravan accommodation. Facilities including powered sites and toilets & showers in the restored Railway Station building are available at the reserve that is a short walk to the hotel and shops.

Get off the highway and take advantage of Border Rivers Tourist Drive, an alternate route following the river from Yelarbon to Goondiwindi to the west or Yelarbon to Texas to the east. This is a sealed road with access to some good fishing spots to wet a line. In season, you will see cotton and wheat crops in paddocks beside the road.

Story Behind The Graincorp Silo Art From Brightsiders “When the Rain Comes.”

This is the original concept that was submitted by the artists, Brightsiders:

Brightsiders’ plan for the painting of the GrainCorp silos at Yelarbon is to create an iconic oasis scene for the town. Set amongst a backdrop of spinifex country, the design will act as a vibrant beacon for the area. The imagery conveys a sense of optimism and hope for the future, while taking cues from the rich history of the community.

The work aims to create immediate visual impact while depicting a story that sets GrainCorp silos at Yelarbon apart from other silo works that have been painted around Australia. Fresh water in Yelarbon’s lagoon stretches across the GrainCorp silos, creating a watery scene amidst the country. A young boy is partially submerged at the edge, cooling himself o­ and setting paper boats aﬂoat.

The boats are constructed out of historical newspaper remnants found at the old jail in the Yelarbon Recreational Grounds, symbolising history and the creativity needed to drive future endeavour. The young farm boy pays homage to the important role that primary industry serves in the region.

The use of a large human ﬁgure across the two larger towers ensures that the unique conﬁguration of the GrainCorp silos at Yelarbon are utilised to their full potential, as the image will be seen afar. The positioning of the ﬁgure also takes into consideration the staggered layout of the silos which further highlights the epic scale of the structures while also managing to draw the eye to the calming ﬂow of the watery scene.

Rich blues and greens of the under water imagery will create a feeling of tranquility for the viewers as they drive into town.  Water lilies will stretch across the GrainCorp silos at Yelarbon, with paper boats amongst them as a kingﬁsher ﬂies above the water surface.

During our visit to the community, we found that to live in the region, the people of Yelarbon must be resilient and tenacious. We witnessed this in many forms, particularly in the way that primary industries and farmers have continually adapted to environmental, technological and social changes that have unfolded over the centuries.

We witnessed a silent strength and optimism which seemed to always look forward to the future, despite the challenges of the past.

The artwork we have created looks to avoid depicting a literal representation of this stark environment. Instead, this work looks to create a hopeful image that compliments the ever-present strength and hope carried by the community.

This story within the artwork, including the use of the folded paper boats made from historical newspapers, elevates the concept from being a literal representation of the landscape.

The ingenuity and craftsmanship represented by the boy making the paper boats symbolises Yelarbon’s industries, past and present, that rely on residents using hands-on skills to carve out an existence in the ever-challenging country environment.

With the creation of a landmark of this magnitude, we believe ‘When the Rain Comes’  will act to ‘quench the curious’ thirst of tourists passing by and encourage them to stop and connect with the people of Yelarbon. 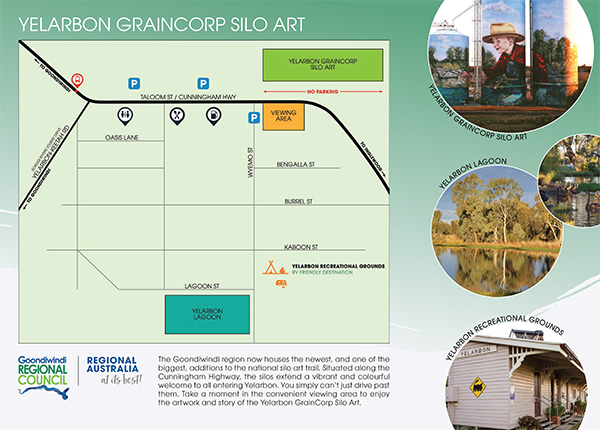 At 8,320 km, the Dingo Barrier Fence was the longest manmade fence in the world when it was constructed. Starting at the Great Australian Bight in the south-west of South Australia, the fence ran across to the north-west New South Wales border then into Queensland and up to Cloncurry before starting south, where it terminated at Yelarbon. Today, sheep flocks in Queensland, New South Wales, and South Australia are still protected by a slightly shorter version of the fence.

An old strainer post in Yelarbon now marks the end of the original route. You’ll also find a replica of the traditional fence along with sculptures of the dingoes that the fence aimed to keep out.

The Yelarbon Men’s Shed wanted to create more interest and tell more of the story and the reasons behind the dingo fence so people could visualise the traditional fence aimed to keep the dingos out. The existing old strainer post was marked by a monument only, which we thought could be expanded by adding a sample of a replica fence, with the agreement of the YCCC (Yelarbon Community Consultative Committee). With assistance from the Goondiwindi Regional Council, three metal cutouts of dingos were added.

Yelarbon Men’s Shed received fantastic feedback and decided to expand the sculptures to tell the entire story with some suggestions to include sheep, a kangaroo and an emu. With the enthusiasm of the Yelarbon Men’s shed they ended up with four sheep, two emus, three kangaroos, and three dingos to complete the scene.

Pull up at the Yelarbon Memorial park and find peace and quiet beside the ANZAC soldier sculpture. You’ll also find picnic tables, toilets and a playground at this shady spot. Discover some of the town’s military history at the Yelarbon Soldiers Memorial Hall, then pop into Granny Murphy’s Craft Shop on the main street. You can stock up on souvenirs of the silo artwork, browse handmade crafts and enjoy freshly-baked cakes.